“Don’t take the car out unless it’s urgent.”

I just heard a weatherman say that on the radio. Now if, like me, you have ‘invincibilitis’, you’ll think you’re above warnings from people with qualifications in meterology and you’ll be absolutely fine. Well. Put your car keys down, chuck another log on the fire and listen to this.

On 5 January 2010 I got into my car with my son Ted, 11 at the time, and Godfrey the pug. (Who doesn’t live with us any more but that’s a whole different story.)

Godfrey’s only got one eye (an unfortunate incident with a rosebush) and so the other one was regularly checked out by a brilliant ophthalmic vet called Kim Jorgensen in Petersfield, Hampshire. The journey from Brighton normally took about an hour and twenty minutes.

The weather was typically January grey, not raining, just very cold. About six miles away from the vet’s surgery, it began snowing. Not normal flakes though, great big ones, like cotton wool balls. Ten minutes later, the motorway traffic ground to a halt. After a while, people began getting out of their cars; there was already about eighteen inches of snow. It became clear that we were going nowhere very fast, if anywhere at all. 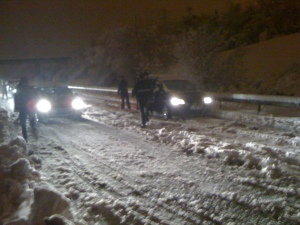 This amount of snow fell in about 15 minutes.

I got chatting to a lorry driver called Jason; when he offered us his comfy warm cab for the foreseeable future, I quickly agreed. (Not without taking a photo of his numberplate first, I hasten to add.) 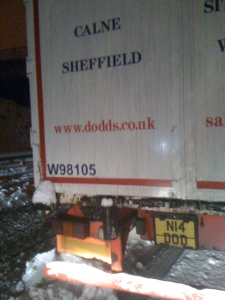 Use them for all your lorry requirements, they’re great.

Jason was a treasure, shared his Coke with Ted and his corned beef with the dog. We were just rifling through his DVDs (and no, that’s not a euphemism) when the traffic started moving again, so we ran back to the car. Hilariously, the pug jumped out of the cab not realising how far up we were; Ted and I had to scrabble around underneath all the snow, but we found him, unharmed. (His face was like that before all this, I promise.)

And that’s where we stayed for the next ten hours. The cars in front kept stopping and starting. Forwards for 20 yards, stop for 20 minutes. Forwards for 50 yards, stop for half an hour. Eventually, the Army arrived to lift the abandoned cars out of the path of the snowplough. As the cars at the back of the queue tailgated the snowplough, we couldn’t get a place in the line. It took us ten hours to travel six miles.

Being programmed to be as good as my word and turn up for the appointment, no matter what, I did – at 3.30am. I drove past the surgery, not entirely sure what to do next. (I found out later that the staff were also snowbound, and we could have stayed the night there. Don’t.) Lost, I asked an RAC man who was parked up on a bridge above the motorway for a route home.

As he was talking, a TV camera crew appeared out of the darkness, from GMTV, wanting to know what it was like being stuck for so long etc. It didn’t seem bizarre, as things were already bizarre. I did my best, in the middle of the night – and with no make-up on I might add – and off they went. (It was later written in the Daily Mail that I had sought them out in order to further my career. I’m honestly not that clever.)

I did my best to get us home, but it was impossible. It began to dawn on me that we were stuck in the car for the night. Thinking it was a big adventure, having been told it was, Ted (and the dog) fell asleep and I began to freak out. Which was more likely to kill us: freezing to death while we slept, or the fumes from keeping the engine on? So I stayed awake all night, turning the engine on every ten minutes, for heat. My phone battery was very low and I didn’t have an in-car charger (I do now), I was – well, terrified. No-one knew where we were, including me.  Panic.

As dawn broke, I realised to my horror that we had been parked very near a 24-hour petrol station, where people had been congregating in the warmth for the night. But we had smoky bacon crisps and cream soda for breakfast, so it wasn’t all bad. Ted loved it, the dog had a flapjack.

The Hampshire police diverted us to Haslemere, where cheery Dickensian stereotypes were sledging and snowballing, happy about the day off work. I hated the snow by now; after all, it’s just frozen rain with good PR. 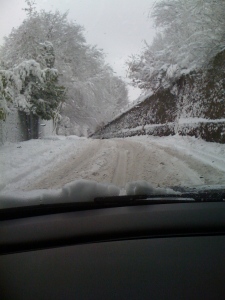 The view from the car when we slid our way into Haslemere.

Having negotiated the up-hill-and-down-dale nature of the icy country roads on no sleep, we crossed the border into Surrey, where the police made us turn back again. By now it was lunchtime the next day, I was exhausted and badly needed to rest, anything, before driving back to Brighton. My phone battery had finally died, and all the hotels were fully booked. In the absence of anything else to do, I parked up and had a cry. 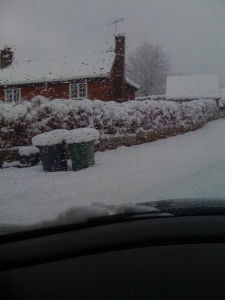 You can see how much snowfall there had been by the top of the wheeliebins.

Amazingly, a burly man in a 4×4 who was out towing stuck cars in a christianly way tapped on the window and offered to take us back to his house. I took a risk and said yes, thinking I could always kill him first and then sleep on his sofa. But Sandy and his family were just lovely, even though he woke me up after an hour to say it had started snowing again, we’d better leave now or we’d be stuck there for a couple more days.

He gave us a thermos of soup, and showed us an illegal route back onto the A3, which had been officially closed. That was an eerie drive, being the only car on the motorway, the snow making the road almost invisible. My most frightening moment of all was when someone threw a snowball down from a bridge; it hit the windscreen with such a smack that I thought we’d been shot at. I can still hear the sound now.

We arrived back in Brighton at 7.30pm the day after we’d left. That’s a 28-hour round trip. Fittingly enough, the same parking space we’d left from was free. (This is as rare as hen’s teeth in Brighton.) Ted and I and poor Godfrey took to the sofa and the fire and the telly in a big way, for a couple of days, until it had all melted away. I sent a lovely new thermos to Sandy, and I commended Jason the lorry driver to his employers. He hadn’t told them about us, because he’s not supposed to pick up passengers. But they can’t have been that cross because they sent Ted a model of their lorry.

I was heartened by the kindness of strangers, admiring of my son’s ability to adapt in adversity and utterly freaked out by the power of something that looks so innocent and beautiful but can be so menacing.  Ted and I still aren’t keen on snow, it’s fickle and untrustworthy. 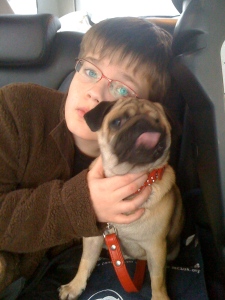 Ted and Godfrey, home safe and sound (apologies for rubbish photo, was a bit mental…)

You know when they say don’t go out unless you have to? They mean it.